One year. It’s exhausting even reciting the global, social, and local calamities that have impacted everything that comes with everyday expectations, as displacement and loss have redefined how we exist in time and place. And, it’s up to us—collectively and individually—to figure out how to deal with it. 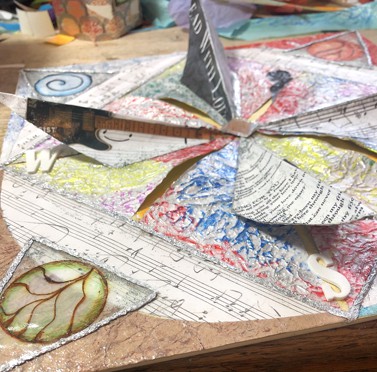 As much as I would like to talk about resilience and utopia, we are not quite there yet. Many creative souls are distressed—restrictions on gathering have hit hard against ensemble (dance, music, theater) work, and largely knocked audiences out of the picture. The pain accompanying these changes is undeniable.

But, the new rhythms of everyday life coupled with the need to do things differently has generated an irrepressible creative churning. People are seeking fulfillment by making art, music, theater, bread (the new cliche), sewing, writing, filmmaking, storytelling—as a way to explore pathways to a new normal. With all this activity, there is an artistic boom right around the corner.

So, will artists lead the way to the new reality? Apparently, Artists with a capital “A” are expected to be visionaries and activists, to use the superpower of carrying symbolic and urgent messages in response to the current times. Yes … and…. is anyone going to listen? To respond? What is the call to action and does there always have to be one? Does everything always have to have deep meaning?

As I really can’t answer for anyone else, this is where I segue into talking about my own approach. Meaning is in the eyes of the beholder. To me, there is value in the act of making and the resulting finished work is a “whole ‘nother” story. When an artist—or anyone—makes a statement, the alchemy lies in its being understood. It’s a person to person thing, no matter the scale of the work.

During this year of solitude, I have paradoxically warmed to the idea of making art with the idea of a public audience, I am responding to calls for participation in shows that beg for meaning. Truthfully, this is a lot of fun, and as I work, I concoct stories that I’d like to convey through visual means. If I make something—small scale—in which I put things next to each other that look nice, with colors and textures I think are cool and perhaps an evocative or figurative drawing, then create a narrative around it, there are multiple points in the work to which an audience can respond.

More power to me if the message resonates and a conversation ensues that propels an action. Here’s my caveat: this is not necessary. Wherever art falls on the spectrum between meaningful and decorative, there is still worth in the act of creation. The other story—the monetary worth held in an object, participating in commerce by selling finished work on the market—is an essay for another day.

Jazz and Me
Scroll to top