I’ve always been fascinated by art in public places. However, while basking in the art-rich Bay Area, Los Angeles and New York landscapes, I’ve pondered what differentiates “true” public art from art that merely exists in public space. I wonder who decides which art is worthy of public space and how it comes to be. 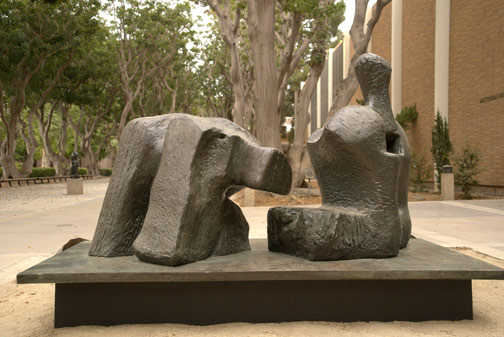 Long ago, I was a UCLA art history undergrad hanging out in the Franklin D. Murphy Sculpture Garden | Hammer Museum. This beautiful space was designed in 1967 “to create an edifying environment that fosters the learning process,” Walkways and lawns were adorned with elevated bronze works by “name” artists like Henry Moore, David Smith, Alexander Calder, Richard Serra, Francisco Zuniga, and Auguste Rodin (notably all male artists, there are now a few works by women artists including Deborah Butterfield and Barbara Hepworth). While I agreed—and still do—that “works of art are best enjoyed as part of everyday life,” even then the art seemed frozen in time. I wondered, how did it get there? How were these works of art deemed worthy? How are students expected to understand and interact with these works? Is their mere presence enlightening and uplifting, as those who installed the garden intended? Now my daughter enjoys the same campus, and this precious, protected sculpture garden hasn’t changed perceptibly.

Obviously, these works and this lovely garden have value, but it made me wonder, what is public art? I got another perspective in a senior seminar taught by Prof. Arnold Rubin, who held the view that forms of artistic expression deemed “primitive” are all around us and worthy of our attention. We went on field trips to experience pageantry (a lot where Rose Day Parade floats were constructed); food art (a fancy cake bakery); body art (a tattoo parlor and an erotic piercing salon); colorful murals in Venice, CA; and a foundry that was casting large sculptures for the 1984 Los Angeles Olympics. I was hooked—art is everywhere. I wrote about the Olympic graphics campaign, through which the entire Los Angeles metropolitan area was united, for both anthropology and art history classes. My eyes were opened to the unmatched ability of art to bring people together, define space, shape public opinion, and create atmosphere.

I carried my interest in public art into my master’s thesis at NYU. If I were to do it again, I would focus on the artistic process, including sites, subjects, themes, and good-faith interactions between artists and communities. But it was daunting—and not useful—to make a comprehensive review of vast New York’s neighborhoods, historic monuments, park statues, corporate, foundation, and municipal commissions, public works mandated by percent-for-art funding; free concerts, and neighborhood murals; and prolific examples of spontaneous artistic expression (graffiti, street and subway buskers). Ultimately I focused on decisions made by various administrative and funding agencies. This plodding inquiry got the job done and launched a long career in Arts Administration.

I titled my paper “Art in Public Places” to differentiate it from “Public Art,” which would indicate closer relationships between artists, sponsors, and the viewing public than I found. My central question: who gets to decide how art is included in public spaces? Quick answer: It’s complicated. Funding entities have more power than artists, and community engagement is often less successful than it should be. Commissioned artists may have less control over their projects than they’d like, while projects may meet unexpected hostility, turf fights, or political resistance. Once in the public sphere, everyone is entitled to an opinion about art.

Cultural controversies bubbled up as I developed my thesis, necessitating rewrites. The National Endowment for the Arts, a major sponsor of public art, was threatened by accusations of obscenity over taxpayer money granted for “outrageously inappropriate” work by Robert Mapplethorpe and Andres Serrano. These works gave fuel to apoplectic conservatives (some curiously focused on specific “pornographic” details), who demanded the end of the agency altogether (see: Behind the right’s loathing of the NEA: Two ‘despicable’ exhibits almost 30 years ago).

There were other detractors. Provocateurs like Tom Wolfe lobbed the hilarious term “Plop art” at the ubiquitous sculptural adornments on corporate plazas. One particularly hated example was Tilted Arc by Richard Serra (see: Culture Shock: Flashpoints: Visual Arts: Richerd Serra’s Tilted Arc), ultimately removed as an eyesore after lengthy lawsuits. Buskers and graffiti artists engaged in cat-and-mouse games with authorities. Meanwhile, a New York hotel tax that generated 1% for art was funneled to developers who used it for more “practical” amenities such as benches, tiles, pavement, and railings.

As those controversies have melted into history, the debate over public art has evolved. Still a politically charged, renewed attention includes a critical look at historical monuments. In many cities, Confederate monuments and white supremacist “manifest destiny” depictions of Native and Black Americans are being called out for their warped historical narratives. Philadelphia based Monument Lab is a great example of an organization seriously engaging with difficult issues in public art by “cultivating and facilitating critical conversations around the past, present and future of monuments.” Their mission is to “work with artists, students, educators, activists, municipal agencies, and cultural institutions on participatory approaches to public engagement and collective memory to change how art and history live in public.”

Arts activists across the country can be counted on to address recent and ongoing evils. Art has invigorated social movements including gun control; environmental concerns; the illegitimate use of police force to intrude on private lives; the treatment of children in Federal custody and reckless deportations; reproductive rights and women’s inequality; and the Occupy movement in response to the Wall Street aggravated financial crisis. Black Lives Matter statements created in response to the murders of George Floyd, Brionna Taylor and too many other Black citizens have become instant cultural touchstones in the form of banners, signs, commemorative portraits, and memorials. Murals have gone up with urgent calls for social justice on boarded up storefronts and seemingly every other spare surface. In Oakland, the astonishing number of images (over 1000!) has led to a community effort to preserve them, led by the Black Cultural Zone Collaborative (see: How Oakland Community Organizers Are Preserving Street Art That Captures A Historic Moment).These monuments are part of a national Black Lives Matter movement, that prominently features bright, large lettering on street pavement, notably in Washington DC at the newly-minted Black Lives Matter Plaza. As the raw expressions of grief and demands for change are expressed through art, it seems like a turning point towards understanding and justice. I hope it is.

Rather than tamping down artistic activity, events of 2020-21 have spurred a growth in artistic work. As activist artists have proven the power of art to capture the public’s attention, there is hope that work created in isolation, displacement, and despair is surfacing in a triumphant return back to the public sphere. For example, New York has staged a three day public art and performance festival called Art in Odd Places reminding us “that public spaces function as the epicenter for diverse social interactions and the unfettered exchange of ideas.” (see: Why We Need Unconventional Art More Than Ever)

Bay Area artists have met this last year with determination. A center of artistic activity pre-COVID, promotion of art has persisted. Notable examples include Oakland’s vibrant street art scene, with murals, installations, outdoor performances, activist art and Oakland Art Murmur. The latter started as a first Friday gathering celebration with art at its core; its mission is “to connect all members of the public to Oakland’s art and spaces.” San Francisco is known for its colorful murals, especially in the Mission District. Over the past year, a project called Paint the Void has raised funds for community murals, providing crucial income for artists during the pandemic. Both Oakland Art Murmur and Paint the Void offer maps and walking tours of their projects.

Naturally, there are mixed reactions. Honeybears in San Francisco by an artist called fnnch are loved by some, but are also seen as symbols of gentrification. The artist says he started painting the bears to make people happy; others accuse him of hogging too much space and over-commodifying his art (see: San Francisco’s Honey Bears: Harmlessly Cute, or Symbols of Gentrification?). A gigantic mural in Oakland by artist Victor Ash was just finished on the 21-story wall of the Marriott Hotel. Sponsored by the United Nations, it is meant to call attention to world hunger with an image of a young girl. Does it get its point across? (see: Oakland’s Largest Mural Doubles As a Call To End Food Scarcity and World Hunger)

These examples just begin to describe the conversations between artists, art, and the spaces in which they live. Even as I view the field as an outsider—given that I’ve never been part of a public art project—I’m seeing a renewed focus on community engagement. I’d like to learn more about artist commissions; how decisions are made; and how people respond to art in public places, particularly when local arts councils and committees are involved. I’ll continue trying to figure out what is now considered “public art” by exploring the many fine works of art and initiating conversations with artists, gallerists, scholars, and other people who are passionate about art in public places.

Consider this a first installment. Looking at public art through an Artistic Literacy lens, I hope to uncover ways that it can strengthen our connections to one another and provide meaning to our lives. I anticipate challenges, contradictions and strong feelings generated by diverse viewpoints, power, money, and prevailing cultural headwinds.

Artists Together Charting a Course
Scroll to top