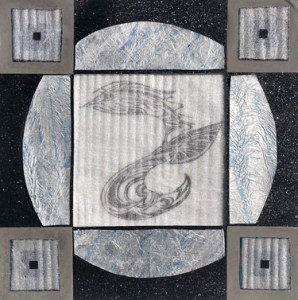 These paired works started as an exploration of stillness and dynamism. It wasn’t until afterwards that I realized that both germinated subconsciously as a story of frustration around sheltering in place for a year.

The S shaped winged creature started as a doodle, then appeared in several of the first works I made while sheltering in place. I consider him a sea creature, but others see him as a dragon or a bird (I do consider this figure to be male, as he is a sometimes stand in for my dad). Some of the works in which he appeared were happy, some fearful, all depicting dreamscapes of of traveling through life, seasons, peril, the world. The creature’s expression can be fearful or joyful as the environment dictates.

Static Motion features the sea creature contained in a tight box. The box is made of white corrugated packing foam, and its ridges can be interpreted as bars or the kind of plastic cover being used for restaurant outdoor dining. The creature is further contained by sturdy layered corners conjuring heavy bolts. Outside the box is a silvery circle, perhaps a full moon, the open air, the great outdoors, out of reach. The palette is silver, black, white, and grey. Turns out, it is a story of frustration.

LocoMotion captures the opposite reaction to the same stultifying circumstances. In bright, happy colors, the sea creature moves through open air at a quick pace. Still contained in his bubble, there is an unmistakable urgency in his exit. In his wake are rows of colorful bouncing balls. Flight stems from frustration.

I find that both works exude pent up energy, ringing especially true as we recognize that a year has passed, the seasons have come full circle, and we are witnessing the possibility of freer movement after being confined for so long.

Art in Public Places
Scroll to top Secured By miniOrange