The curators of Dollhouse: Art as Serious Play honored me with a request to create an art dollhouse from a pre-fab cardboard structure. Here is a little bit about my process It was so much fun! 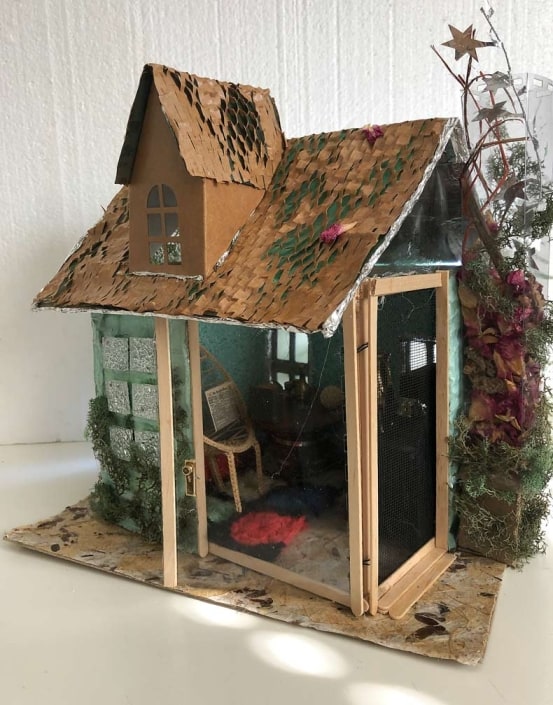 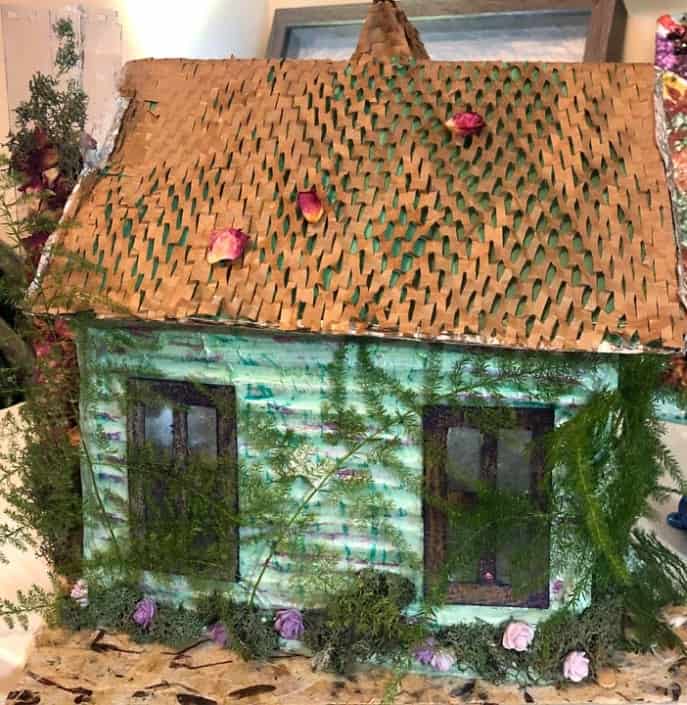 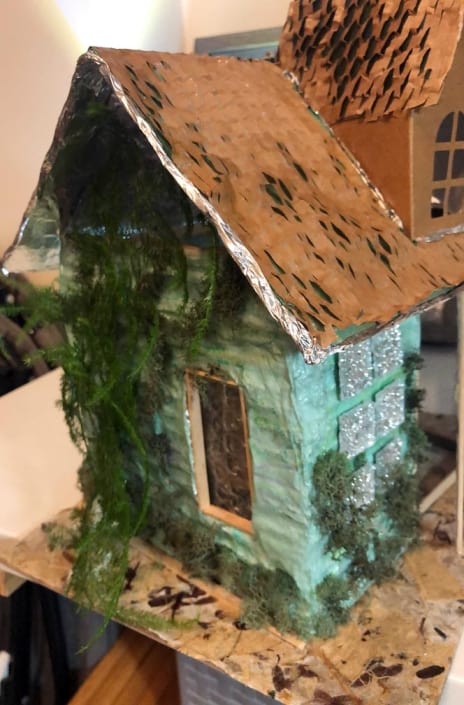 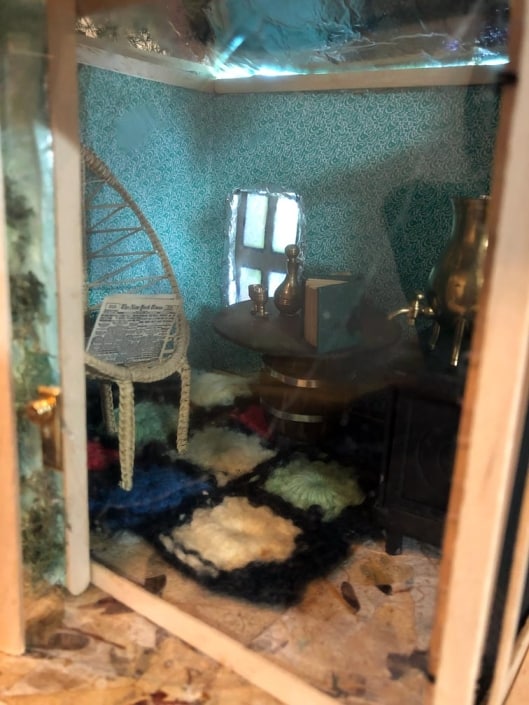 At the request of Dollhouse curator, Priscilla Otani, I created a dollhouse from prefabricated cardboard structures she found online. These are on display along with houses made by Priscilla and co-curator Tanya Wilkinson from the same raw materials.

I’m looking at my dollhouse right now and I’m pretty pleased with the results. In fact, the whole making process left me with a feeling of elation and reawakening. From the start, I wanted to include the interior of the house, first with the idea of lighting, which I ultimately discarded in favor of natural light through windows and skylights.

The first thing I decided was that the structure of the pre-made house was too narrow and the chimney and roof had to go. I also noted that there was no front door. I peeled away the roof and chimney first and gleefully cut off the triangular pieces that were the original roofline.

At that point I decided (adult self) that I would increase the footprint of the house using certain architectural ideas I have gathered as a homeowner and erstwhile architecture student. I wanted access to the interior for placement of furniture tableaux (something I knew from childhood dollhouses). I wanted to use materials at hand, not necessarily all realistic, but it was important to honor the idea of home signified by mimicking a house form. Because the stated goal was to include a dollhouse proper in the show, I decided to make a more or less typical cottage, and I knew I wanted to use a little box house that was also provided to me along with the bigger shell.

I made a trip to my childhood home and opened a box of dollhouse furniture I’d collected as a child and selected a heavy iron stove, wicker chair, crocheted rug, barrel table, and some precious little accessories: a set of brass cups with a decanter, a tea kettle, a water dispenser, a newspaper and a book, plus a little decorative shell and a porcelain platter (now broken). The oven contains some buttons that I remembered using as cookie platters.

After that, I just let each decision flow. I was surprised how fast it came together and also how many hours passed as I was immersed in the process. WIth exacto knife and glue gun, I remade the structure, doubling the “square footage.” I replaced the roof with many layers of cardboard, foil, and packing material, and was pleased that the foil layer looked reasonably like drainage and flashing, while the packing material resembles thatch. I made a cupola from the smaller box, and remade the chimney in clear acetate, which I also used for windows. The walls are covered in green tissue paper over foil to mimic stucco. The chimney is filled with rose petals, ribbon, and redwood bark because why not. I used ferns and moss to add greenery. I suggested a front door by gluing a childhood bought doorknob to a piece of acetate. The whole structure is reinforced with upcycled (adult word) coffee stirrers that I knew I’d have a use for sometime.  The end result is a notably 3 dimensional structure where I can unloose my imagination to roam and relax.

This was SO FUN to make. As you can see, making the house was exactly the kind of play that reached into my “way back” machine, which has been enhanced by adult ideas of structural integrity and what a house “should be.”

The Great Wave
Scroll to top Secured By miniOrange