Over the last months, I have been preparing artwork that is meant to conjure water for a juried exhibition titled SHIMMER:

The theme of the show is inspired by a quote from Toni Morrison, who wrote “All water has a perfect memory and is forever trying to get back to where it was.” 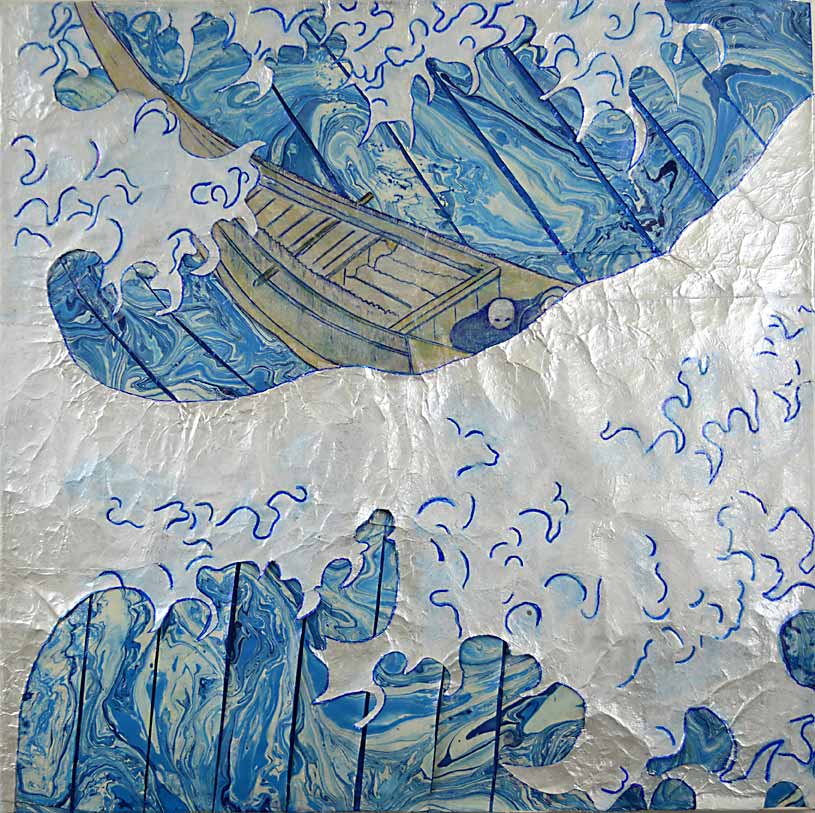 Artists submitting our work considered this statement: “On earth, all life needs water to thrive. It is the source of life, the vehicle of cleansing, and the center of regeneration. From our spiritual selves to our bodily existence, we cannot live without it. Perched at the edge of the Pacific Ocean, the West Coast is extremely dynamic and complex. We experience water in its absence, its fury, and spiritual significance – from crashing waves and rushing rapids to gurgling flows and gentle splashes.”

The theme tickled my imagination, since so many of my works feature shiny surfaces and marine environments. I made two new works featuring fish in water, “Water, Please” and “Riparians,” the latter of which was selected for the exhibition. The two blue fish are imagined, but based on the form of cichlids, who dwell in rivers by the water’s edge.

Additionally, I co-managed–with Renate Woodbury–and participated in a Northern California Women’s Caucus for Art group project based on Under the Wave off Kanagawa (Kanagawa oki nami ura), also known as The Great Wave, by Japanese woodblock artist Katsushika Hokusai from his series Thirty-six Views of Mount Fuji (Fugaku sanjūrokkei) ca. 1830–32. Six artists each received a 24 inch square canvas representing a portion of the Great Wave, with instructions to interpret (not necessarily faithfully reproduce) the original. The results, rendered in a variety of media, coalesced wonderfully. The combined panels will debut at the June Steingart Gallery as the NCWCA’s contribution to Shimmer. Here are our interpretations: 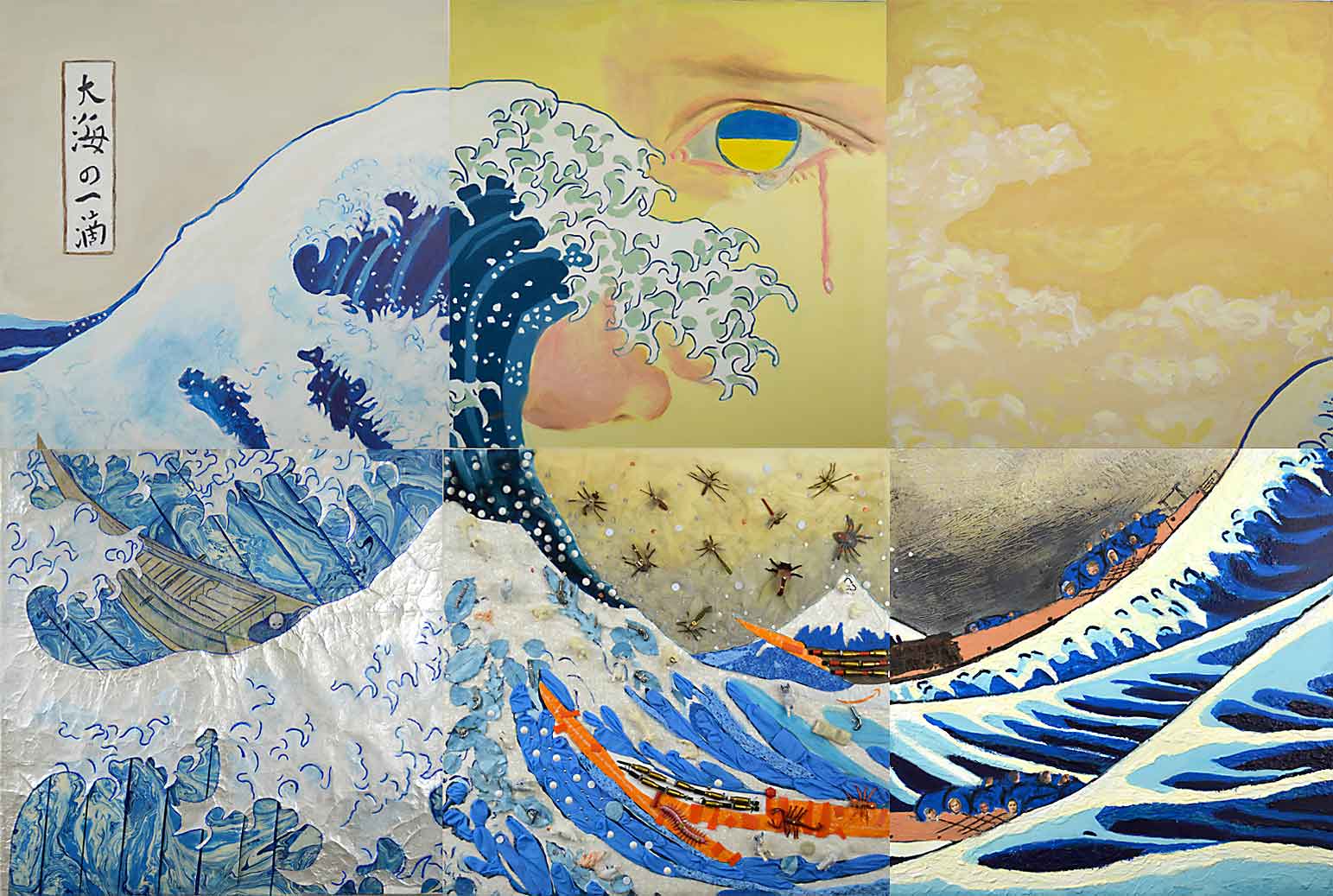 Artists, Clockwise from top left:
Joan DiStefano
My panel is in homage to Hokusai. The Kanji reads: “We are just drops in the ocean.”

Siana Smith
At first, I closely followed Hokusai’s original color and design. The blue and yellow reminded me of the flag of Ukraine that is under attack by Russia. Painting the crying eye of blue and yellow, I express the sadness of the suffering Ukrainian people in the face of the great wave of the Russian invasion.

Renate Woodbury
I joined the Great Wave’ project for fun, and because I wanted to participate in the various interpretations of Hokusai’s woodblock. At first, recreating the corner block of sky seemed so simple that it was difficult. I chose to enhance the color and texture using molding paste, and rough, swirly paint strokes. As a result, the sky stands out with more contrast and variation in the color than in the woodblock.

Rachel Tirosh
Hokusai’s image projected a powerful energy on me, and I felt sympathy for the people struggling to keep the boats afloat and forward. In my interpretation, a rough texture, created with spackle, depicted the force of the storm and the sailors got real people’s faces instead of being anonymous.

Susan Bercu
The turmoil presented in “The Great Wave off Kanagawa,” originally rendered in the then new Prussian blue, was prescient. Today, our seas are polluted by human waste and wars. My interpretation uses recycled plastic and bullet cases. Not exactly able to mimic the exact color, the bright blue latex glove waves add a conceptual layer of devastation. A plastic toy skull crowns my Mount Fuji.

Laura Abrams
Movement characterizes my corner of The Great Wave. Sliced printed paper captures the energy of the rising water, combined with white painted foil that highlights a wide swath of crashing waves. The power of the water contrasts with the helplessness of the people in the tossed vessel about to be consumed by the wave.

Art of Opportunity
Scroll to top Secured By miniOrange