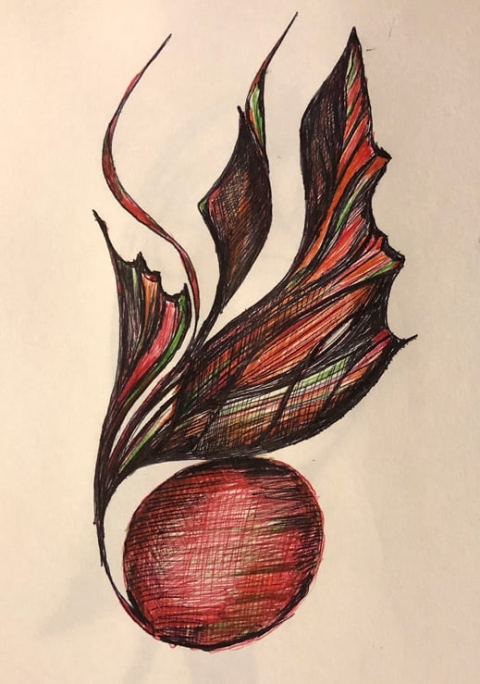 I was tempted to call this post “Doodlin’ Away,”* because my doodling and improvised jazz have been so intertwined with my life.

A trip down memory lane: 1980’s in New York with my uncle Paul Ash and his wife Cobi Narita at the Universal Jazz Coalition, where jazz artists young and old demonstrated their chops in the then only non-smoking jazz room in New York. It was the era of palette-expanding improvisational saxophone solos, and I remember many aspiring vocalists, horn ensembles, and small ensembles in which each player gamed up for their virtuosic turn in the spotlight. I volunteered at the UJC Women in Jazz festival and the Cherry Blossom Asian American Jazz festival and spent many evenings listening to music there. I didn’t know how lucky I was meeting legendary artists Abby Lincoln, Henry Threadgill, James Moody, Max Roach, Jimmy Heath, Dakota Stanton, and later Catherine Russell through Paul and Cobi (the first Kennedy Center Mary Lou Williams Women in Jazz Award recipient). I cherish this formative intro to the music world, and I am proud to carry on my uncle Paul’s love of jazz.

The experience led this visual artist and art historian down an unlikely path. Arts Administration grad school at NYU forced a choice between visual and performing arts. I perceived this as “putting price tags on pictures,” a slow paced schedule involving static exhibitions of objects versus an event based, fast moving world. Ensconced in presenting organizations, projects became dynamic live events—festivals, concerts, artist talks, thematic public forums, community dance, theater and music workshops. Arts education and community programs in the live performing arts were my world for over 30 years.

My soundtrack: KCSM Jazz 91.1, so omnipresent that my daughters memorized the call-in number from childhood (Shout out to Chuy Varela, Alisa Clancy, and Melanie Berzon). Memory lane: thrilling times backstage and in workshops with Chick Corea and Herbie Hancock, Wynton Marsalis and the Jazz at Lincoln Center Orchestra, DeeDee Bridgewater and the Monterey Jazz Festival on Tour, Buena Vista Social Club, Sweet Honey in the Rock, Cecile McLaren Salvant, and so many more jazz greats.

Now comes meshing my own artistry with these experiences. A current project, inspired by the theme of “Composing the Future” is titled “Artists Together, Charting a Course” (watch this space!). This work in progress incorporates published and handwritten notation, lyrics, recorded work, and imagery from composer friends across different genres of music—improvisational and fusion jazz, opera, choral, and rock guitar. Deep thanks to Myra Melford, Melanie DeMore, Jake Heggie, Rodney Franklin, and Shelly Doty for gifting me with their work. The first square of the artwork will be included in Composing the Future, the annual  member exhibition of the Northern California Women’s Caucus for Art May 7-June 27, 2021 at the Bankhead Theater in Livermore.

Time to take flight .. I’m establishing a practice, sketchbook in hand, Inspired by great vocal improvisers (favorites: Ella Fitzgerald, Al Jarreau, DeeDee Bridgwater), doodling away. Like an improvisational solo, one line leads to another, add color, fill in with a flight of fancy, give it substance and volume, make something new and relatable, return to the theme. It’s even more fun when these improvised drawings make their way into finished works. You can see some of my pen and paper improvisations here Drawings, Sketches and Doodles